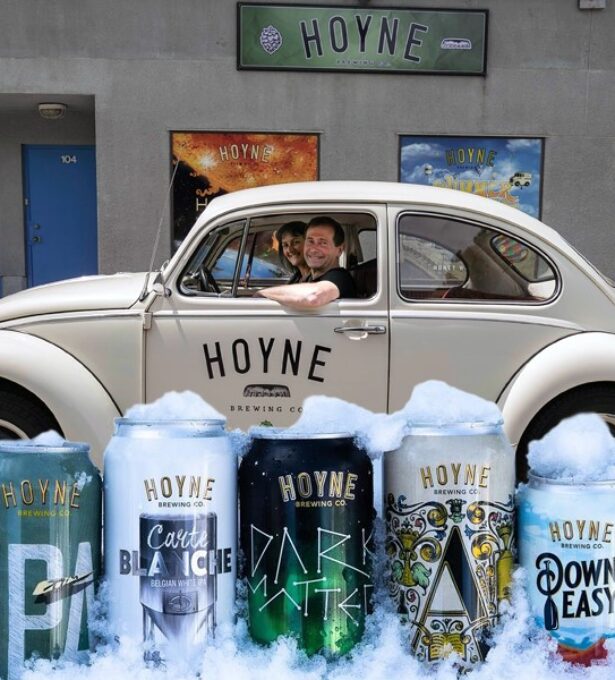 Very few people get to study craft beer under one of the pioneers of the North American microbrewery movement. Frank Appleton taught Sean Hoyne what it means to make fantastic beer. A true mentor, Frank told Sean, “Make great beer, the rest will follow.”

Frank was right. Sean Hoyne made great beer, and the rest followed, in spades.

Sean Hoyne is everything a Renaissance man should be. With a science degree and a Masters in English Literature, he’s also an entrepreneur and someone who’s totally dedicated to the pursuit of understanding the science of brewing.

Originally a home-brew hobbyist in Montreal, Sean and his new bride moved to Victoria to further his academic studies. The young lovers happened to be walking by a building with a sign saying, “Hiring – Future home of a brewpub”.

Upon applying and getting the job, Sean met Frank Appleton, a man who would be his mentor and life long friend. Raised in the UK, Frank was a microbiologist who originally came to Canada to work with Carling O’Keefe in quality control.

Disillusioned with bland Canadian beer and corporate politics, Frank left that culture and brought what we now know as craft beer to BC. Under Frank’s tutelage, Sean quickly learned many secrets to brewing high quality, flavourful beer.

Eventually, Frank moved on to other projects and Sean began his professional and successful career as a brewmaster.

Several years later, Sean opened another pub and as the sole brewmaster was decorated with some of the industry’s highest awards. After two decades of continued success Sean and his wife decided it was time to fulfill a dream and open his own brewery.

In December of 2011, his dream became a reality and Hoyne Brewing Co. opened for business. Hungry for his craft product, the local community embraced Sean’s tasty offerings and cemented his success.

In 2015, the demand was so great he commissioned a 35 Hectolitre system from Specific Mechanical. This system gave Sean the ability to produce the kind of quantity to meet the demands that were now coming in from far and wide, while still maintaining precise control and consistency over every recipe.

Today, the increasing demand has dictated further expansion. With a dedicated team of young (and not so young) brewing enthusiasts coupled with the recent delivery of 140 HL fermenters and Bright tanks ensures Hoyne Brewing Company is in a good position to tackle the decade ahead.

“I strive to create interesting and thoroughly enjoyable beer — beer that looks good in the glass, feels good in the mouth, and lifts the spirit —
and for that, I am proud.
Sean Hoyne – Owner and Brewmaster