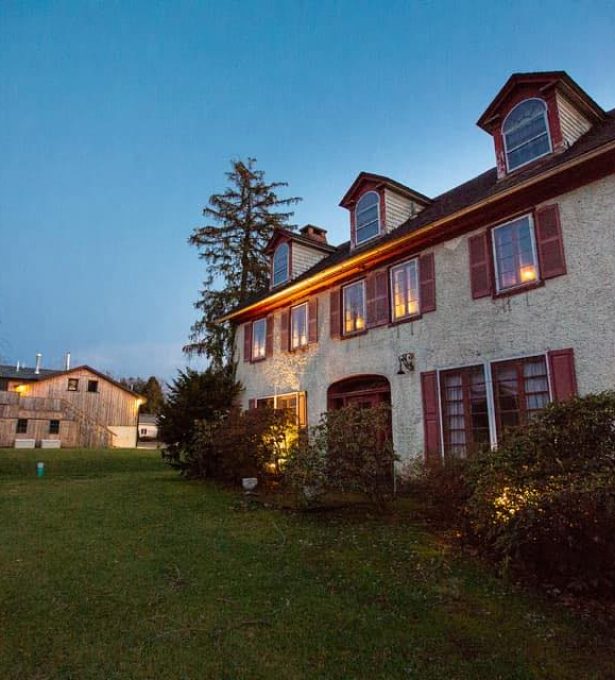 Nestled along a country road in Berks County, Pennsylvania, just west of Pottstown, Brinton Lodge has a storied history beginning in the 1700s. The site’s unusual architecture, eccentric history, and local legends are home to craft brewery and brewpub,
Hidden River Brewing Co.

The original structure, now enveloped by the current building, was a small farmhouse built by the Millards, one of the area’s earliest families who purchased the land from William Penn. The site changed hands several times  and played many roles over the next 200 years, including a munitions factory for the war of 1812 as well as a rumour that the site was a stop on the Underground Railroad.

In the early 1900s, the Wittmans, a wealthy family with ties to the Philadelphia iron industry, purchased the property and lavishly expanded the farmhouse to an opulent 28 room mansion. When the site came under the ownership of Reading hotelier Caleb Brinton during Prohibition, it became an exclusive gentleman’s club. As legend has it, Brinton hand-picked his guests, letting in only the rich and famous from near and far.

In 1978, a psychic medium stayed at the Brinton Lodge for two weeks and identified five spirits: Caleb Brinton, Caleb’s mother, Katharine Wittman (all of whom died in the Lodge), a male spirit he called Dapper Dan, and the troubled spirit of a little girl.

Sightings, encounters and disturbances have been documented for decades. Other visiting mediums have also felt that the site is a portal between this world and the Other Side. Unexplained experiences continue to this day.

One thing that is easily explained is the success of Hidden River Brewery. Their focus on hop-forward beer while maintaining a constant rotation of creative ales and lagers has made them a hit and one of the most popular attractions in the region. In addition to online and delivery sales, you can buy beer to go on site, or stay and enjoy the lovely brew pub’s kitchen from Friday – Sunday.

Owner Kevin Margitich is also the director of Brewing Operations. He brews his popular products on a Specific 10 BBL,
2-vessel system we built for him back in 2018.