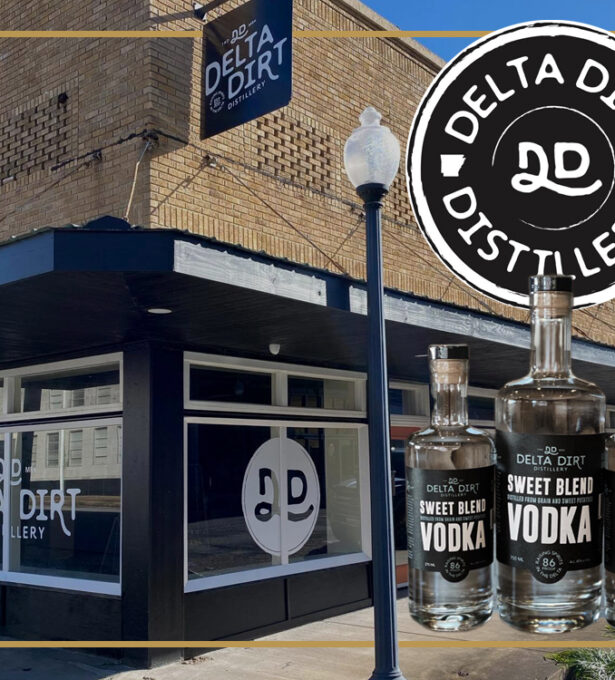 The story of Delta Dirt Distillery, based in Helena, Arkansas, reads like an award-winning Hollywood screenplay that features history, determination, entrepreneurial spirit, struggle and ultimately, triumph.

Four generations of Harvey Williams’ family have worked the farm that now provides the sweet potatoes and corn for a delicious product that they can’t keep on the shelf – Sweet Blend Vodka. Delta Dirt is one of just 4 distilleries using these ingredients, which produce a distillate that boasts a smooth earthy taste with a subtle sweet finish.

Harvey’s Great Grandfather was a sharecropper on the original 86-acre farm. His son, UD Williams, Harvey’s Grandad, bought the farm in 1949 with proceeds from cotton and moonshine he was making on the side. Sharecroppers would share a portion of their crops with landowners. They often were paid in scrip that had to be used at plantation commissaries. It was almost impossible to get out of debt.
Harvey’s grandfather somehow managed to do so. According to family legend, he talked to a banker to figure out exactly how much he owed. He harvested his crop and took it some distance away to sell, achieving a much higher price than his landowner would have paid. Without the crop that he planned to resell at a higher price, the landowner had almost no choice but to accept the cash in exchange for the farm.

Harvey and Donna Williams grew up in neighboring Lee County. Both children of farmers, they met in high school and became sweethearts. With no jobs to be had, Harvey went to the University of Arkansas and got a degree in agriculture and engineering. He and Donna went on to have careers in food processing.

In 2016, living in Dallas, they heard from Harvey’s brother, Kennard, who had just returned from a farming convention where he brought back the sweet potato vodka idea and sparked his brother Harvey’s imagination. Not long after, they decided to venture into the distillery business and finally come back home to the farm.
Harvey and Donna went to work filing for business licenses, alcohol licenses, and finding a distillery location. Then COVID-19 hit. “There were many delays related to Covid, but we persevered,” Harvey said.

While the pandemic put a halt to the family’s plans, Harvey now sees the silver lining. “I think the time allowed us the space to get the product and facility right.”

Delta Dirt perfected the vodka recipe by December 2020. The man behind the magic and the bar is none other than Harvey and Donna’s youngest son, Thomas, who was on track to head to med school when his dad came to him with the idea.

“It’s quite different, but also I enjoy science and experimentation, it’s like I’m getting my own big lab right here,” he said.

Thomas produces between 30 to 50 cases a week of his sweet-blend vodka.

“You’ve heard of farm-to-table restaurants,” Harvey says. “This is a farm-to-table distillery.”
Donna also helps her son Thomas add drinks to their tasting room menu, using their sweet potato vodka of course. Thomas’ older brother Donovan has since joined the team as will their sister when she’s finished serving with the Navy.
“When I was growing up it was a very popular place, so that’s what we wanted to get back to because Cherry Street is beautiful,” Donna said. “So we want others to see the beauty of the street and the town.”

It’s beginning to happen. Coming plans include a pizza and gourmet hot dog shop and other small businesses of the kind that draw tourists.

“We want this to be a catalyst,” Harvey says.

Back at the farm, Kennard prepares to attend a sweet potato conference at Mississippi State University. Like his brother and their father and grandfather before them, he’s always planning, studying and dreaming.

If this was a movie script, you could bet on sequels to follow as it seems like the Williams family story is far from over.